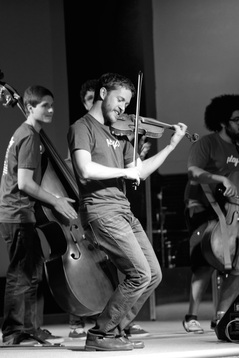 Hailed by a class of 2nd graders as “wreely nice and kind” and “the coolest man on erth,” Arizona native Taylor Morris enjoys blurring the line between violin and fiddle. After studying classical violin at Arizona State University with Dr. Katie McLin, he spent four years touring the world as one of five fiddlers with “Barrage,” a Canadian-based, world-music violin troupe. His travels, both with Barrage and personally, have led to performances in 48 states and 13 countries with musicians from a multitude of backgrounds. Some recent performers with whom Taylor has collaborated include: multi-style cellists Mike Block & Rushad Eggleston; fiddlers Hanneke Cassel, Casey Driessen, Jeremy Kittel, & Lauren Rioux; concert violinist Tricia Park; arts educator Steve Seidel; and the Tetra String Quartet. Offstage, Taylor obtained a master's in education from Harvard University and is a passionate advocate for arts education. He co-founded and co-directs the Gilbert Town Fiddlers, teaches as a Guest Lecturer at Arizona State University, maintains a private violin studio in Chandler, and regularly works with students and educators around the country to explore the violin’s unique relevance to a variety of genres. To learn more about Taylor, visit his website. 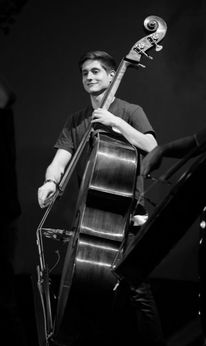 Bassist Adam Gurczak is a Boston-based performer, educator, and arts organizer who is passionate about collaboration and social change through music. He has premiered many new works both as a soloist and chamber musician and has performed with various ensembles like the New England Symphony, Boston New Music Initiative, Boston Chamber Symphony, and Tucson Symphony Orchestra. Outside of the classical realm, he also works with various folk artists in the greater Boston area and is the founder of the IRIS Collective, a new arts initiative dedicated to the celebration of refugees, immigrants, and other displaced persons through storytelling accompanied by music and art. He also teaches regularly through his own private studio; the Josiah Quincy Orchestra Program, where he co-teaches in two orchestras with students ranging from grades 1-5; the New England Music Academy; and at StringPlay, which he has been part of since its founding in 2013. Adam will graduate with a master’s in music from Boston Conservatory at Berklee come May 2019 and previously graduated summa cum laude from the University of Arizona with a B.M. in Music Performance, a B.A. in Italian Studies, and a Thematic Minor. Beyond performing and teaching, he also enjoys painting, baking, photography, and attending concerts at Club Passim, a non-profit music venue, where he works as the box office coordinator. To learn more, visit his website. 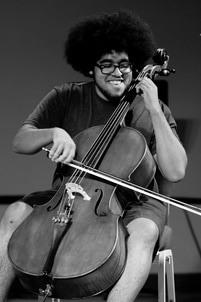 Carlito Stewart, has studied cello since the age of 9. Growing up, his father gave him a  well-rounded love for all genres: jazz, rock, R&B, blues, and soul. He completed a double major for his Associate of Applied Science (AAS) in Music Business and Arts at Chandler-Gilbert Community College. Then he transferred to the University of Arizona where he began his Bachelor’s degree in Music with an emphasis on Cello Performance, under the direction of Dr. Theodore Buchholz.  Carlito has performed at numerous public schools, community venues, and also at a benefit concert for the MD Anderson Cancer Center. Carlito performed as a member of the Scottsdale Community College Cello Ensemble, with his former cello instructor, Dr. Jenna Dalbey of the Tetra String Quartet, for over two and half years. He also, regularly attends the Mike Block String Camp where he has performed with inspiring folk musicians and crazy cello pioneers like Mike Block and Rushad Eggleston. Through his years of performing he has had the privilege to play with musicians like Mike Block, Hanneke Cassel, Lauren Rioux, Brittany Haas, Natalie Haas, Jayme Stone, Rushad Eggleston, Joe Walsh, Kai Welch, and, the heavy metal band, Disturbed. Carlito is also an Eagle Scout. 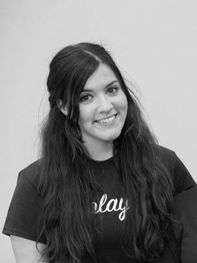 Courtney Pinski started the violin at the age of 10, with fiddling always being her passion. In her youth she began studying with VerRona Grandil, and was a member of the East Valley Youth Symphony for 7 years. In high school she was both president of her school's orchestra council and president/founder of Campo Verde HS's chapter of the Tri-M International Music Honor Society. Besides her classical endeavors, she was also an inaugural member of the Gilbert Town Fiddlers and has attended the Mike Block String Camp in Vero Beach, FL. Currently a sophomore at the University of Arizona, Courtney is studying under professor Timothy Kantor and working towards a B.M. In music performance. Along with playing in the Arizona Symphony Orchestra and various other classical groups, she is lead violinist of the Jacob Acosta Band (whose new album is coming out later this year), and has frequent group and solo gigs around Tucson. 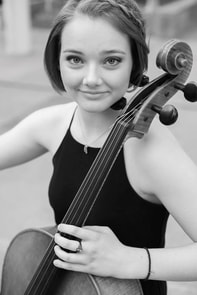 About to start her fourth and final year at ASU, Cameryn Baum is a cellist studying Cello Performance under the guidance of Tom Landschoot. She is a member of the ASU Symphony Orchestra and Visiting Quartet Residency Program, having the opportunity to work with and learn from world renowned soloists, concertmasters, quartets, and other amazing musicians. Her degree focuses predominantly on classical music, and Cameryn makes sure to incorporate folk music in her education in many different ways. She has also attended the Mike Block String Camp, working with Natalie Haas and Mike Block. Cameryn has even had the opportunity to perform "The Butterfly" in concert with quartet Brooklyn Rider! She also applies her knowledge of all types of music in private lessons with elementary, junior high, and high school students from around the valley. In addition to the many adventures presented to her through music, Cameryn has been involved in United Sound, the Sexual Violence Prevention Department, and the Undergraduate Student Government at ASU. During the summer, Cameryn volunteers at Camp Patrick, a retreat and bonding experience for children with spina bifida. Cameryn loves being involved in her community and jumps at every opportunity presented to her!

Kat Squires, born and raised in Gilbert, Arizona, somehow still despises the heat. She is a violist of eight years (and an aspiring cellist of three) who loves playing her instrument, regardless of genre. As a recent graduate of Mesquite High School, Kat will be attending her freshman year of college at Arizona State University in the fall. She has played in her school orchestras since the fifth grade, and also with the Chandler-Gilbert Community Orchestra for two years, under the instruction of Amber Dudley. She plans to continue with her musical academia throughout college, even if music is not her chosen major. Kat attended StringPlay for the first time in 2016, where she found her love of fiddling. This led her to audition and join GTF, an amazing group led by Taylor Morris and Sara Duce. During her time in the Gilbert Town Fiddlers, Kat has had the opportunity to work with Brad Phillips, Ross Holmes, and Tracy Silverman, among many other extremely talented musicians. This will be Kat’s fourth year at StringPlay, but her first time as a teacher!